A Primer on Business Strategy From Hamilton Helmer's 7 Powers 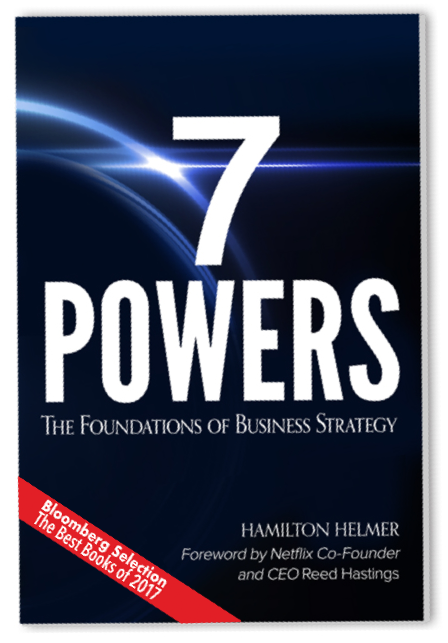 In Silicon Valley, we've become well-versed in the importance of finding product/market fit as the most important early pursuit for any new product or startup. We've continued to refine our understanding of the definition of product/market fit, developed customer discovery techniques that can help guide us to product/market fit, as well as established several benchmarks to assess whether we've achieved initial fit. While this obsession with product/market fit is warranted since it remains so elusive, it is necessary but ultimately not sufficient for building a significant and enduring business.

Beyond product/market fit, it turns out business strategy really does matter. A sound strategy can make the difference between our initial product/market fit being ephemeral versus the beginning of a meaningful and lasting business. The most successful businesses realize this and work hard to continually protect their strategic position. But the young upstart that has been laser-focused on clearing the initial hurdle of product/market fit may find itself less equipped for developing a winning strategy.

I recently read Hamilton Helmer's 7 Powers: The Foundations of Business Strategy and found it to be an excellent primer on business strategy. Hamilton published this work in 2016 after a career of working with over 200 clients as a strategy consultant, including Netflix, Spotify, and Adobe. He then further refined his concepts as a business strategy professor at Stanford University. I wanted to share his central framework for those looking to develop their strategy chops.

Hamilton narrowly defines a successful strategy as creating a route to persistent differential returns for your business. Accomplishing this requires each strategy to have two critical components: a benefit and a barrier. The benefit materially augments your business's cash flows by enabling you to increase prices, reduce costs, and/or reduce investment needs. The most important part of a strategy, though, is establishing a barrier, which prevents existing and potential competitors from arbitraging away the benefit. This is necessary to ensure your benefit persists, otherwise competitors could quickly catch up and remove your advantage. This is often described as developing an economic moat for your business. Hamilton then goes on to define 7 strategies, which he refers to as the 7 powers, that accomplish both of these goals. Hamilton asserts that these 7 strategies encompass every possible strategy for creating a successful moat and suggests every business must leverage one or more of these strategies to build a significant and enduring business. Let's now turn our attention to understanding each of these strategies and how they can be leveraged for your business.

The classic example of this is a manufacturing business like Intel where the upfront cost of setting up a factory can be more effectively spread across each unit with higher and higher production volume. This significantly reduces the cost of each of its chips relative to its smaller rival Advanced Micro Devices, enabling Intel to leverage its superior economics to continually fight off AMD.

But I found the Netflix example to be a more interesting one. Netflix's traditional streaming service put it in a precarious strategic position as it had to continually license content from owners, pay licensing fees based on consumption, and renegotiate those deals every few years. This both limited Netflix's margins but also allowed any competitor to strike similar deals with content owners, preventing them from establishing a moat. Netflix completely changed the game, though, as they moved to developing original content, like House of Cards. The original content strategy was a great example of scale economies, as they now paid an upfront price for the content, which allowed them to reduce their costs and increase their margins on a per subscriber basis as they added more and more subscribers. A challenger looking to compete with Netflix's original content would not only have to be able to make the large initial outlay to produce original content, but would also suffer from higher per subscriber costs with a far smaller base of users to spread those costs amongst. Even if a challenger attempted to gain share by eating some of the cost, Netflix could leverage its superior cost advantage to then undercut the competition. So you can see how Netflix moving to original content significantly improved its margins but also established a compelling moat preventing competitors from easily emulating it.

LinkedIn, the professional network, is a canonical example of a service benefiting from network economies. As the user base grows, users are able to connect with more of their existing colleagues, search and find more people of interest, and apply for more jobs. Recruiters, the primary source of LinkedIn's monetization, can also find more relevant candidates as the member base increases. But most importantly, these strong network effects have made it nearly impossible for anyone to compete with a generalized professional network. The prospect of joining an alternative network which most of your colleagues aren't already using deteriorates the potential value of the alternative, regardless of whether it offers significantly improved functionality. This strength of network effects often leads to a winner-take-all dynamic in industries where network effects are present.

Vanguard and its assault on the world of active equity investing with its low-cost passive index fund approach is a great example of counter-positioning. While today we can easily appreciate the merits of passive investing, at the time Vanguard introduced the model it was a highly contrarian approach. So many were skeptical about why someone would just accept the average returns of the market instead of choosing active funds designed to beat the market. What we all now know is just how rare it is for actively managed funds to continually beat the market. And Vanguard saw its assets under management grow as more and more investors saw promise in the passive approach. The reality though was it would have been easy for a competitor to introduce their own low-cost passive index funds, as there wasn't anything technically preventing them from doing so. Yet they were extremely slow to do so. Fidelity, a leading incumbent at the time, was well aware of Vanguard's approach but continually concluded that introducing low-cost passive indexes would significantly cannibalize the fees they enjoyed on their actively managed funds and would fly in the face of the better-than-average returns they promised in their flagship active funds. So at every turn, Fidelity actively decided against taking Vanguard head on. Even when Vanguard continued to see significant traction, Fidelity only dabbled lightly in the space out of fear of effecting its core business, allowing Vanguard to solidify its leadership position in the market.

Traditional on-premise software, like SAP's ERP solution leveraged by many enterprises, is a classic business that benefits from switching costs. The initial implementation of SAP is expensive, not only from a dollars perspective, but typically because of a heavy investment in customizing the platform to handle a company's unique workflows as well as the significant training to get the team up-to-speed on how to leverage the sophisticated software. The prospect of ripping out the solution and replacing it with an alternative becomes both an expensive and daunting proposition, encouraging customers to stick with their existing solution even when an alternative becomes available promising superior functionality.

Branding
A business that leverages branding enjoys a higher perceived value to an objectively identical offering that arises from historical information about the seller.

Tiffany's jewelry is a classic example of a brand that has become a standard for wealth and luxury. Customers are willing to pay a hefty premium for the same diamonds they could find elsewhere. Tiffany was able to achieve this initially through a strong focus on silver craftsmanship, winning numerous awards for its high-quality jewelry, as well as inventing the now classic Tiffany setting. But in addition to their focus on product quality, they also carefully curated their image. Take their signature Blue Box that all their jewelry comes in. Any woman can quickly recognize when they have been gifted Tiffany's because of it. It's no wonder Tiffany's to this day commands a significant margin premium over modern alternatives like Blue Nile.

Cornered resource
A business that leverages a cornered resource has preferential access at attractive terms to a coveted asset that can independently enhanced value.

The most common examples of this are patents on drugs, property rights for minerals, and other IP rights. Though a more unique example of this is Pixar, which has enjoyed an absolutely astonishing record in the movie business, releasing hit after hit, which is incredibly rare in the movie business. Their first 10 films had an average Rotten Tomatoes score of 94%, 8 Pixar films have been awarded an Academy Award for Best Animated Feature, and two have been nominated for Best Picture. What was the cause of this extreme performance? Central to their success was the three founders of Pixar, who formed the core of the Brain Trust at Pixar. This included Steve Jobs, the visionary and brilliant entrepreneur, Ed Catmull, a pioneer CGI computer scientist, and John Lasseter, the animation genius. They each were the masters of their domains, with John on creative, Ed on technical, and Jobs on business and financial with implicit trust for each other. What prevented others from just hiring one of them away? Nothing short of extreme loyalty to each other. While many others tried to replicate Pixar's success they were never able to do so in such a sustained way. It ultimately led to Disney realizing its only option was to acquire Pixar, which it did in a $7.4B acquisition.

Process power
A business that leverages process power has embedded company organization and activity sets which enable lower costs and/or superior product and which can be matched only by an extended commitment.

Toyota is probably the most famous example of exhibiting process power by developing its now renowned Toyota Production System. The TPS was a superior automobile manufacturing process that resulted in both higher quality as well as far more durable vehicles. American car manufacturers couldn't compete, even when they tried to become well-versed in the methodology that Toyota was using. Ultimately there was so much nuance in the Toyota way and it extended beyond their own four walls to the way they sourced from supplier, even bringing some of their methodology to those suppliers. The sophistication of the process was critical in it being a powerful barrier that ultimately allowed Toyota to compete so effectively against American car manufacturers and to grow it's share.

I hope this has been a useful primer on business strategy and given you a framework to think through what strategies you might be able to employ in your business to build a meaningful and enduring business. I also encourage anyone who is interested in more deeply understanding these strategies to grab a copy of 7 Powers: The Foundations of Business Strategy.
Related Essays
Want to accelerate your product career?
I've finally distilled my 15+ years of product experience into a new course designed to help PMs master their craft. Join us for the Spring '23 cohort of Mastering Product Management.
Are you building a new product?
Learn how to leverage the Deliberate Startup methodology, a modern approach to finding product/market fit. Join us for the Spring '23 cohort of Finding Product/Market Fit.
Enjoyed this essay?
Get my monthly essays on product management & entrepreneurship delivered to your inbox.