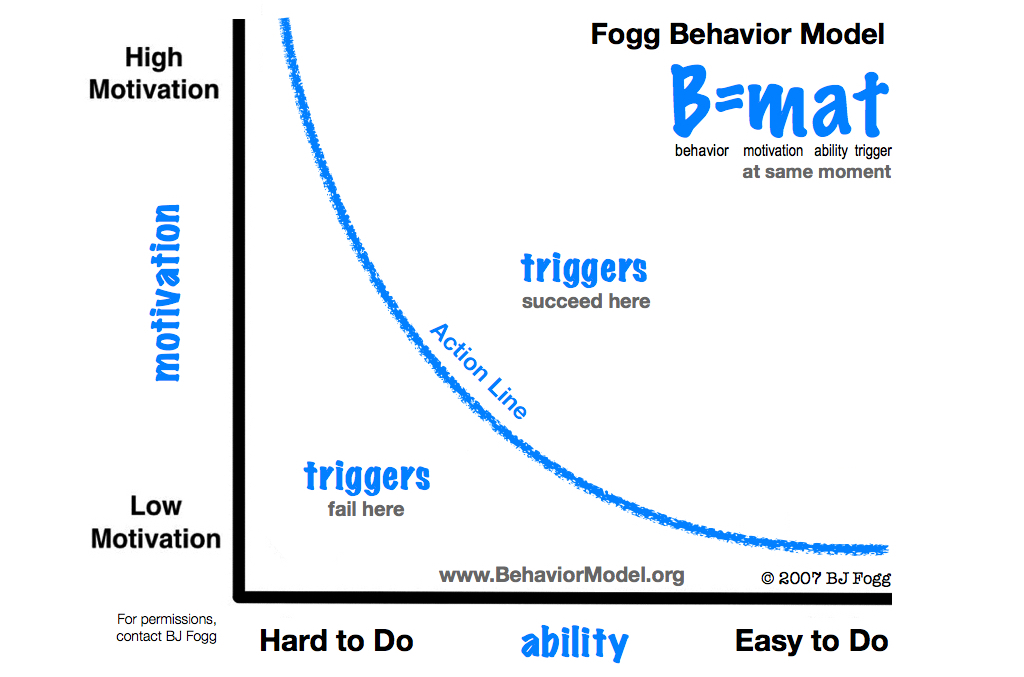 Startup2Startup has been on a roll lately with great events and this week was no exception. BJ Fogg, a professor and researcher from Stanford University, stopped by and shared with us his secrets on behavior change. For those of you who are not familiar with BJ Fogg, he has been studying behavior change for over a decade, is the founder of the Persuasive Technology Lab at Stanford, and author of the book Persuasive Technology. He also led the first Facebook Apps class at Stanford, which was massively successful in generating explosive growth for student apps. BJ Fogg has leveraged his insights into how technology can be used to bring about behavior change both in his academic work as well as in industry work, especially in the mobile and health sectors.

His focus for the evening was around how we can leverage his research in our own startups to help bring about the behavior change that we seek in our users. Practically every startup is trying to elicit some behavior from their users, whether it’s getting them to log into your site daily, signup for a new service, or share their content with their friends. And the lessons from BJ Fogg help us to understand the psychology behind eliciting these behavior changes and how we can ensure they happen. I thought I’d take a moment to summarize his 5 key secrets from the evening.

1. Look for Patterns
Despite significant advancements in technology, BJ Fogg made clear that humans frankly haven’t changed that much. Our reasons for acting are fairly universal and we should leverage these age old lessons in our own work. And when we see patterns of behavior change that work in other settings, they can often be re-applied to our problem. What follows are four such patterns that can be applied in most settings.

2. Baby Steps
In designing for behavior change, one of the keys to success is ensuring you are seeking only baby steps from your users. For example, a common exercise goal is to exercise 45 minutes/day. That’s a fairly amorphous goal and intimidating to start. So instead, you should break it down even further. Maybe to something as simple and achievable as walk 10 minutes/day. But even put a limited span of 10 days on it. And schedule it specifically after lunch. Then the idea of walking 10 minutes/day after lunch for the next 10 days seems significantly more approachable and achievable. While this may not be our ultimate goal, it’s the best way to get to the desired behavior change started. And it’s no wonder that many of the top diet books are limited to 2wk or 30 day programs.

One common example of leveraging such an optimization in the web world is signup forms. Sometimes we attempt to walk the user through all the steps necessary to get the most value out of our app during the signup process. But the reality is the drop-off rates are going to be significant unless we break it down to the very minimum needed to get them started, and then exercise baby steps to get them the rest of the way there. Leveraging existing logins via Facebook and Twitter help here to even further reduce the friction required.

3. 3@1
In BJ Fogg’s behavior model, behavior happens when 3 things exist at the same time: a trigger, ability, and motivation. A trigger is the call to action. That could be an email, a social notification, a mobile message, etc. Ability is about how easy is it for the user to take the action that we seek. And motivation is the user’s inherent desire to achieve the results. All 3 of these need to be present for the behavior to actually happen.

This gives us a framework to analyze our own app scenarios to see if we are ensuring that all three are actually present in order to maximize the opportunity for the desired behavior.

4. Hot Trigger in Path
BJ Fogg’s advice to maximize effectiveness in behavior change is to put hot triggers in the path of motivated people. The idea is to first start with folks who are inherently motivated. And then focus on triggers that allow the user to accomplish the task right now, as opposed to cold triggers, where the user is not empowered to act right now. For example, a billboard ad is a cold trigger because there is no way for the user to take an action right away. So instead ensure that you are always delivering triggers when they can take the action immediately.

The interesting lens that BJ put on looking at the current market environment is that we are currently witnessing a fight for who controls the ability to push hot triggers to users. Google, for example, has had this ability the longest with their search engine rankings. But Facebook’s notifications system has become more important than ever. And at the same time the mobile platforms are creating an even more interesting triggering capability. Understanding how best to leverage these emerging triggers is necessary to successfully driving behavior change.

5. Ability > Motivation
Another key insight from BJ was that ability matters more than motivation in designing for behavior change. It’s much easier for us to move the needle on ease of use than it is for us to change motivation. While we like to think that we can leverage education to get the user more motivated, that’s an extremely uphill battle. Instead put your effort in taking away all the friction in performing the desired action and thereby improving their ability to complete the action.


Overall I thought it was a great lens to apply on product design: focus on the key behaviors that we are trying to elicit from our users and optimize those through lasting lessons from psychology. I know I’m going to leverage this framework in my own work on Connected to think about how to elicit some of the desired behaviors, including reconnecting with one person in your network each day.
Want to accelerate your product career?
I've finally distilled my 15+ years of product experience into a new course designed to help PMs master their craft. Join us for the Spring '22 cohort of Mastering Product Management.
Enjoyed this essay?
Get my monthly essays on product management & entrepreneurship delivered to your inbox.