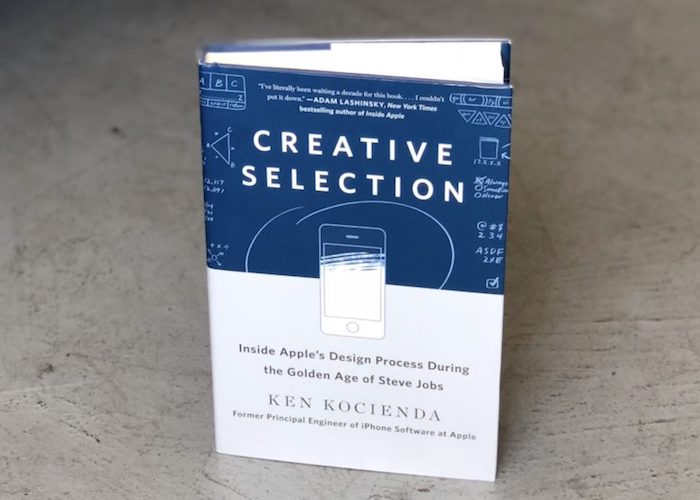 I've long believed that the most innovative products are built by teams who innovate on the very process by which they develop those products. And it's why I've always been a student of companies that consistently deliver innovation to the market. It's no wonder I loved reading The Everything Store sharing the story of Jeff Bezos growing Amazon to the e-commerce juggernaut that it is today. Or Creativity, Inc. that provided an inside look into Pixar's consistently creative hit machine. And that's precisely what excited me about diving in this weekend into Creative Selection by Ken Kocienda, a new book providing a detailed look inside the design process at Apple.

Creative Selection did not disappoint. While much has been written about Steve Jobs and Apple, I found Creative Selection particularly insightful because it provided a vignette into the development of the first iPhone, and in particular, one of it's most critical features - the keyboard - from the perspective of Ken Kocienda, the software engineer ultimately responsible for developing it. Ken goes through the many challenges and subsequent iterations to address those challenges with building the first keyboard to be presented only on a glass display. And in doing so, it showcased how Apple's design and development process was different from traditional Silicon Valley companies in subtle yet incredibly important ways.

Ken distills the Apple development approach that ultimately made them successful to seven elements: inspiration, collaboration, craft, diligence, decisiveness, taste, and empathy. And he walks through what each of these elements means to him with detailed stories exemplifying each.

But I wanted to share some personal observations I took away from the book on how Apple built products in such a fundamentally different way.

Ken describes the process by which they would prepare product demos for their own team and then for various leaders, use that demo as the primary avenue for feedback, and then continue to iterate to the next demo, followed by more rounds of demo feedback, and so on. He calls this process creative selection. While at the surface this may sound like a typical product review process that many companies have, there was so much that was different about it.

First, demos were done early and often, even at the prototype stage. These were not just reviews at the end of the process to get final approval, but instead they were done to show early progress, determine viability of the project, and make fundamental design decisions. The goal was to produce an initial prototype to demo as quickly as possible and then continually refine the prototype through subsequent feedback sessions. These demo sessions with senior leaders happened on a weekly basis, not months apart.

And in contrast to so many classic reviews where leaders are largely concerned with ensuring projects are on time, that there are no unaddressed bottlenecks, and that the team is executing on the right strategy, leaders at Apple in fact played the role of arbiters of taste. Ken defines taste as developing a refined sense of judgment and finding the balance that produces a pleasing and integrated whole. And in these reviews, leaders would often be making calls on the spot on design decisions for the product. Ken retells the story of many reviews with Scott Forstall, who was head of iPhone software, and Steve Jobs himself who would make critical decisions to remove UI elements, to pick amongst a few design directions that the team was presenting, and to cancel efforts entirely, all based on the context and feedback they got from the presenting team, their own first-hand experience with the demo, and their ultimate sense of taste. This feedback was highly respected by the team and didn't feel like classic executive swoop-ins because of how deeply involved the senior leaders were on a weekly basis with engaging in-depth with the product during these demos.

The nature of these meetings also looked so different from traditional exec meeting topics with discussions around market opportunity, competitors, resourcing, etc. They were instead fundamentally about the design and user experience. And each leader would play with the product themselves just as a user would to really connect with the product experience.

Equally important to their process was extreme product dogfooding, which they called living on the product. They understood that even after making initial product decisions in these demo reviews, they needed to continue to experience the product on a daily basis to ensure the experience was actually satisfying. And in doing so, they would continually come up with feedback from amongst the team who was living on the product, and incorporate that feedback into the product. Ken shares how each change he made to the keyboard auto-correction capabilities would be rolled out to the small team of iPhone software engineers and how the feedback directly from those individuals shaped his future iterations. I do regularly see a disconnect in product quality emerge when the product, design, and engineering teams aren't using their own product on a daily basis.

And finally, the teams tasked with owning critical software components were very small empowered teams of individuals. Each component would have a DRI - a directly responsible individual - who was ultimately on the line for producing that component. And there was a fundamental belief that small teams did the best work, because they were empowered to do so. Ken was the DRI for the iPhone keyboard and worked directly and closely with an associated designer. Glaringly absent from these teams were in fact product managers. The responsibility instead was divided amongst the engineers, designers, a program manager for project management support, and the senior leader. By empowering these very small teams they had the ability and motivation to do their very best work.

I would encourage you to check out the book for yourself as it was a fascinating glimpse into the design process of one of the world's most innovative product companies: Creative Selection by Ken Kocienda.
Related Essays
Want to accelerate your product career?
I've finally distilled my 15+ years of product experience into a new course designed to help PMs master their craft. Join us for the Spring '23 cohort of Mastering Product Management.
Are you building a new product?
Learn how to leverage the Deliberate Startup methodology, a modern approach to finding product/market fit. Join us for the Spring '23 cohort of Finding Product/Market Fit.
Enjoyed this essay?
Get my monthly essays on product management & entrepreneurship delivered to your inbox.