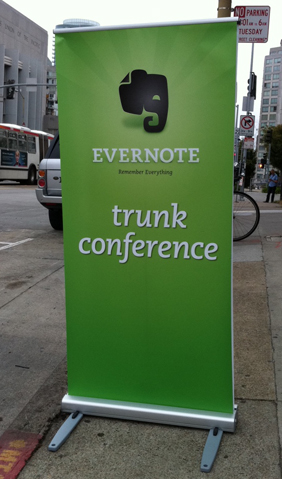 Today I had the pleasure of attending the Evernote Trunk Conference, Evernote’s first ever developer-focused event. I was excited to attend not only because Connected is an app in the Evernote Trunk, but also because Evernote has been a break-out success story in the productivity space. I thought I’d share some of my thoughts from the day.

The 100 Year Company
When Evernote raised their recent $50M round of funding, Phil Libin announced his vision for Evernote being a 100 year company and explained how this monster round of funding would help ensure that was possible. He re-iterated at the event that there is no exit strategy for Evernote and he is truly committed to building Evernote for the long-haul. It’s refreshing and bold to see such ambition and I believe their recent moves reflect making it a reality.

Evernote Acquires Skitch
Evernote is already putting that monster round to use and today announced their first acquisition: Skitch. A very complimentary tool, Skitch has become a popular Mac app for editing and annotating photos. It’s exciting to see these two productivity apps together and speaks to Evernote’s larger vision of productivity beyond simple note taking. I expect we’ll see more acquisitions from Evernote in the near future along these lines.


They continue to re-inforce that freemium can indeed work given the right situation of a large base of users (thanks to their success on mobile app platforms), cheap per user costs, and a product that users absolutely love.

Evernote is Building a Global Brand
It was exciting to see how thoughtfully Evernote has been thinking about establishing their brand. Gabe Campodonico, Evernote’s Creative Director, walked us through how they got to establish their brand identity and what it stands for. As you can see from the images below, you can get a sense for the different iterations Evernote went through to come up with their perfect logo:

But in addition, they are focused on building a truly global brand. Only 1/3 of Evernote’s audience is in the US and the rest is globally distributed, with Japan being the second largest country. Apparently in Japan there are dozens of books written specifically about Evernote, a testament to it’s adoption throughout the country.

Evernote is Committed to the Platform
Today’s event showcased Evernote’s commitment to it’s nascent platform. The excitement in the room from developers was outstanding. And Evernote promised a significant set of enhancements to their API to make it much easier for developers to develop across platforms, including new SDKs for Silverlight, Actionscript, Node.js, and more. They even hinted at new APIs coming out that would enable even deeper integration into Evernote via their new Galleries functionality.

I continue to be impressed with both Evernote’s strong vision and their continued excellent execution. Looking forward to what's next!
Want to accelerate your product career?
I've finally distilled my 15+ years of product experience into a new course designed to help PMs master their craft. Join us for the Fall '22 cohort of Mastering Product Management.
Are you building a new product?
Learn how to leverage the Deliberate Startup methodology, a modern approach to finding product/market fit. Join us for the Fall '22 cohort of Finding Product/Market Fit.
Enjoyed this essay?
Get my monthly essays on product management & entrepreneurship delivered to your inbox.