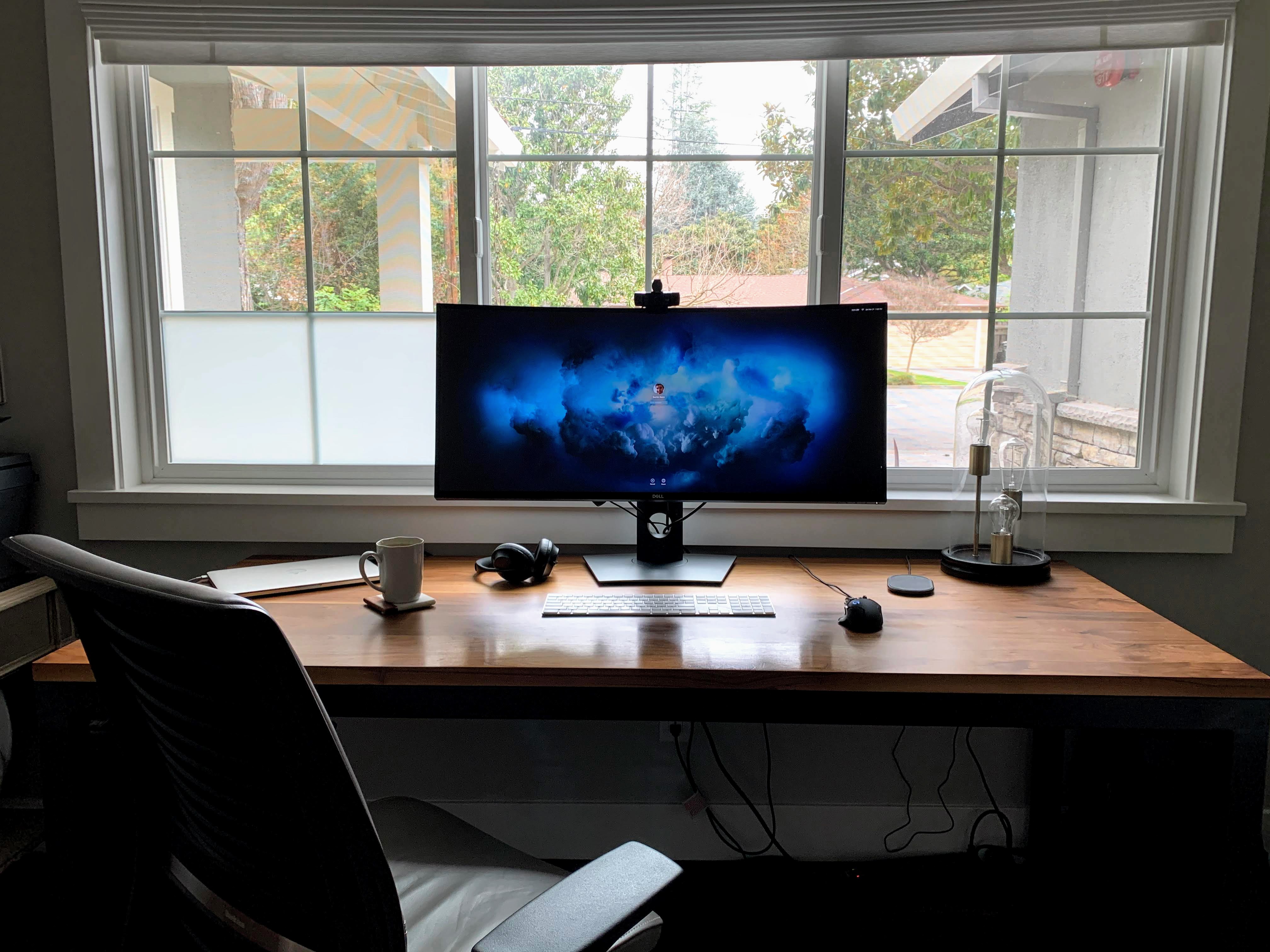 So many of my colleagues have recently been introduced to working from home for the first time and will likely have to for the foreseeable future. But many are finding their home environment to be far less productive than their traditional office. I, on the other hand, have now been working from home for over four years. Each year I've found a variety of ways to optimize my home office setup to maximize productivity. And I can now safely say that I'm far more productive in my home office than I've ever been in a traditional office setting. So I thought I'd share all the gear that has contributed to my productivity.

13" Mac Book Pro
As a developer, I've been loyal to the 13" Mac Book Pro for years. I've always found I need the extra performance it gives me compared to the Mac Book Air for tasks like compiling in XCode. That being said, I've found I can get away with the 13" compared to the 15"/16". It has enough performance in it and I much prefer the lighter-weight body. The 15"/16" is a beast and can be quite bulky when on the go. Since I never use the actual laptop screen at home, I don't miss the extra screen real estate except when I'm out of the house. But I'm rarely coding when I'm on the go, usually just web browsing, email, and writing, and in those cases 13" is plenty. If you are not a developer or using other intensive applications like video editing, I would certainly take a look at the brand new Mac Book Air that was just released. They fixed the keyboard issue that has recently plagued all of Apple's laptops and given it a performance boost. It will likely keep it's title as the most popular Mac Book Apple produces. I'm personally waiting for the new 13" Mac Book Pro to be introduced with a decent keyboard expected later this year so I can finally upgrade from my heavily dated 2015 model.

Dell U-Series 38" LED Monitor
In 2019 I upgraded my display to the Dell U-Series 38" LED Monitor. This ultra-wide screen has been the single biggest boost in my productivity in recent memory. I previously used the 27" Apple Cinema Display for about a decade. I know many people have a dual monitor setup, which certainly works, but having no seam in the middle and being able to interact with windows easily as one continuous surface makes the ultra-wide screen setup far superior for me. It has enabled me to have three full-size windows open side-by-side, which removes any need at all for switching amongst overlapping windows. The one downside of this monitor is that it's not a 4K display. It's a matter of time before ultra-wide screens get this upgrade. But I've still found the extra screen real estate worth it relative to the extra resolution. Though I'm sure graphic designers and video editors would likely make the opposite choice.

Magic Keyboard with Numeric Keypad
I love having the wireless Magic Keyboard because it allows me to move it wherever I like around my desk without any chance of snagging a cable. I've also found myself using the numeric keypad on numerous occasions, so I'm glad I didn't settle for the smaller version without it. The battery is incredibly long-lasting so I only occasionally have to charge it despite heavy use.

Logitech G502 Proteus Spectrum Wired Optical Gaming Mouse
In 2018 I upgraded my mouse to the Logitech G502. I was originally planning on getting the Logitech MX Master 2S Wireless Mouse as it's been a favorite amongst professionals. But a friend suggested giving the Logitech G502 a try, so I ordered both to do a side-by-side comparison. I wasn't expecting to like the G502 because it's very much a gaming mouse and it had a wire, which I was trying to avoid. But I ultimately fell in love with it. First, it's far more accurate than the MX Master 2S. In a side-by-side, they weren't even close. Second, the G502 was far more comfortable in my hand over long periods of use. So I ended up with a wired gaming mouse even though I don't actually game and couldn't be happier. They recently came out with a wireless version that I'll likely upgrade to at some point.

Logitech C920s Pro HD Webcam
This year I bought a new webcam to sit on top of my monitor so I didn't have to resort to using the built-in webcam on my laptop whenever I had to do a video call. I went with the Logitech C920s, a very popular webcam amongst streamers. The wide-screen 1080p webcam offers great video quality, dual stereo microphones, and easily sits on top of most laptops and monitor setups. It turns out the highest quality webcams now deliver 4K video, but they are still fairly expensive and the vast majority of video conferencing software won't even let you take full advantage of it. If you plan on using the webcam for shooting professional videos, I'd probably opt for a 4K model like the Logitech Brio, but if you are only using it for video calls, then the Logitech C920s is definitely the way to go.

Bose Noise Cancelling Headphones 700
While a pair of solid noise cancelling headphones is certainly helpful in the traditional office, it's near essential in the home office environment. There will inevitably be something going on in the rest of your house that you'll want to drown out to maximize your productivity. In 2019, I upgraded to the new Bose Noise Cancelling Headphones 700. They are an upgraded model compared to the very popular Bose QuietComfort 35, offering a far better microphone that's useful for phone or video calls. They also look a bit sleeker than their predecessor. Other than that, the Bose QC35 are still super solid so you might save some money and just grab a pair of those.

Ubio Labs 10W Qi Wireless Charging Pad
Given all the phones we have in our pockets these days barely last a full day, I find having a wireless charger on my desk to be super helpful to simply drop the phone on there whenever I'm at my desk and pick it back up whenever I get up. While wireless chargers in general charge slower than directly plugging them in, the extra convenience makes up for. I personally bought four of these Ubio Labs 10W Qi Wireless Charging Pads for my house since they are pretty affordable. But any such wireless charger will do.

Steelcase Think Chair
Many corporate offices have done a good job of investing in ergonomic chairs for employees. But they are even more important for your home office. Without the constant moving between meetings, you'll end up tied down to your desk even more than you would traditionally in the office. In 2018, I finally decided to invest in a quality ergonomic chair for myself. My goal was to solve for both form and function. I wanted an elegant chair that didn't look like the typical drab office chair while providing great ergonomics for the countless hours a day I'd spend on it. I found the Steelcase Think Chair in leather to be a fantastic solution for both my goals. There are plenty of other great options on the market, so my biggest advice is just to make the investment for your own health and productivity.

Room & Board Parsons Desk
I also upgraded my desk from the standard issue IKEA desk in 2018. I was looking for an elegant desk that was large enough to feel truly spacious with a solid wood top. I found exactly what I was looking for in the Parsons Desk by Room & Board. I chose to get it in black walnut butcherblock. I especially like that it comes with built-in USB and power outlets along the entire back of the frame, allowing you to far more easily hide your cords to create an even cleaner aesthetic. Some might find drawers helpful as well which you can optionally get with this desk, but I personally like having a completely clear bottom so I can freely move my chair along the entire length of the desk or easily allow a second chair to swing over when reviewing various work on my monitor. I've absolutely loved this desk ever since I got it. The one optimization I considered at the time was getting a standing desk. Though I couldn't find a really well designed standing desk option that didn't have the typical drab office aesthetic, so I opted against it. There may be better options out there now that are worth considering.

The Shade Store Motorized Shades
I absolutely love having a large window as the backdrop for my desk. Not only is the natural light refreshing, but I enjoy gazing out the window when thinking, with beautiful blue skies and trees all around me. Initially I was worried that since my office was in the front of my house, it would be distracting seeing neighbors and such. But it turns out the 38" monitor is so large that it effectively blocks everything at the eye level which prevents any distractions and simply lets me look up into the sky and tries. I also realized that every evening I wanted to close the blinds to provide privacy and then open them back up again every morning to let the light in. To make this as frictionless as possible, I invested in motorized shades. This way it's absolutely no friction to open and close them every single day. I happened to get mine from The Shade Store since I appreciated their warranty on it since motorized shades are historically very unreliable. But there are certainly cheaper options out there.

So that's a quick look at the essentials of my home office. I hope it gives you some ideas on how you can invest in your own home office setup to maximize your productivity.
Related Essays
Want to accelerate your product career?
I've finally distilled my 15+ years of product experience into a new course designed to help PMs master their craft. Join us for the Fall '22 cohort of Mastering Product Management.
Are you building a new product?
Learn how to leverage the Deliberate Startup methodology, a modern approach to finding product/market fit. Join us for the Fall '22 cohort of Finding Product/Market Fit.
Enjoyed this essay?
Get my monthly essays on product management & entrepreneurship delivered to your inbox.