The PayPal Wars and its Lessons for Today's Entrepreneurs 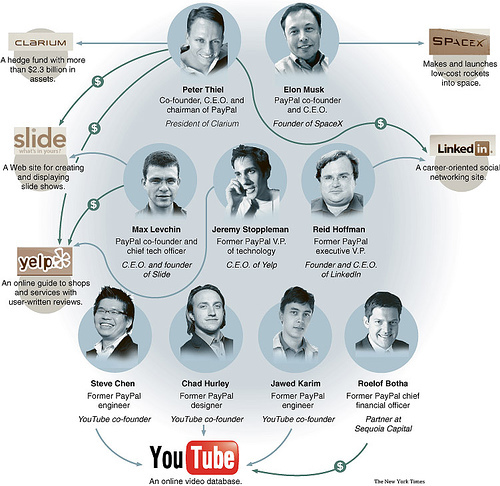 I was perusing Andrew Chen's bookshelf and came across The PayPal Wars by Eric M. Jackson. It turned out to be a riveting tail of the entire journey of PayPal, from its early conception to its monstrous success, retold by one of its earliest hires in marketing. It's a story I thought I knew, but there was so much more to it than the simple success story we all hear about.

I thought I'd take a moment to reflect on the five most important lessons I learned from their journey and my thoughts on their application to today's entrepreneurs.

1. Strong long-term vision coupled with pragmatic short-term attainable goals
One of the most insightful aspects of the story was getting a chance to understand Peter Thiel's management style from the inside. Though he is known as a brilliant financial strategist, it was a simple management tactic he used throughout that really struck me as effective. Peter Thiel is no doubt a man with a big vision. His vision for PayPal was no less than to become "the Microsoft of payments, the financial operating system of the world" and he often talked about solving corrupt government practices of inequitable wealth distribution through his simple online service. This world domination view became a strong rallying cry for all employees. Yet he was always careful to put in place pragmatic short-term attainable goals that kept the team focused and executing against an achievable milestone. This included carefully monitoring, tracking, and rewarding success on increases in percentage of eBay listings using PayPal verses their biggest competitor at the time, Billpoint.

2. It's all about assembling an A-team
Equally exciting about the story was being introduced to the entire management team, which was full of rock stars. Peter was big on hiring incredibly talented, brilliant, and ambitious folks. They didn't necessarily need to be experts at the role they were assuming, but smart and hungry all around. Many of the strategic decisions they made and their success in doing so can be directly attributed to the team. Today all of these top execs have moved on to new and equally ambitious projects, including Peter Thiel (Clarium Capital, Founders Fund, Palantir), Max Levchin (Slide), David Sacks (Geni, Yammer), Reid Hoffman (LinkedIn), and Elon Musk (Tesla). By focusing on bringing the right team together, entrepreneurs can ensure that they can handle even the most difficult challenges.

3. Push decision making down as far as possible
One of the key takeaways for me was that leadership is not about having all the best ideas, but instead about providing a culture for great ideas to win, regardless of where in the company they came from. PayPal promoted this culture throughout and even institutionalized it through the producers role. Producers at PayPal is what we would typically call product managers these days. They essentially were given full authority and responsible for a feature area or discipline and expected to execute and report on their success. Even the naming of the role "producer" showed how focused they were on results and holding people accountable to them. By pushing decision making down, they allowed the best ideas to win from the people who were living and breathing the space all day long, not just the senior management tam.

4. Even the winners have rocky roads
While it's easy to look upon the success of PayPal as a sure fire win, it was clear from this story that throughout they faced many challenges and potentially disastrous situations.

In the early days fraud became a horrendous issue for PayPal. They were losing millions of dollars to the mafia and other organized fraud circles. The reputation, business, and economics were at stake if they could not solve this problem. Max however was able to build strong algorithms for detecting the fraud and eventually reduce the risk. In addition, they had a rather tumultuous merger with X.com which caused a complete shuffle in the star management team, Peter Thiel leaving as CEO, and then his eventual return. And their IPO, which occurred prior to their acquisition by eBay, was almost doomed by pending lawsuits and banking regulatory issues.

It's an important lesson in that all startups have rocky roads, even the successful ones. One needs to know what they are getting into when embarking on a startup, but be equally persistent to overcoming them.

5. The risk of dependence on a platform
Yet the biggest issue that plagued PayPal throughout it's journey is one that is near and dear to many entrepreneurs today: dependence on platforms. PayPal's rise was built on top of eBay as the preferred method of receiving payment for both buyers and sellers. Yet their success was completely dependent on eBay. eBay constantly changed policies which completely disrupted PayPal's service and caused them to endlessly be scrambling to maintain listing share. The situation got monumentally worse when eBay acquired PayPal's competitor Billpoint and made it the default payment method on their service. Many would have assumed PayPal was dead at that point. Yet PayPal was able to survive, through a variety of tactics.

The most important tactic that I think is a key lesson for today's entrepreneurs was building a consumer brand and strong customer affinity towards it. When eBay made changes which threatened PayPal's position, PayPal often appealed to their own users, who flooded the eBay forums with complaints. This strong customer affinity eventually forced eBay to have no choice but to buy PayPal if they were going to keep their customers happy.

While platforms like Facebook and Twitter have created huge opportunities for entrepreneurs, it has caused many of the largest startups leveraging these platforms to feel at risk due to the whims of the platform. My belief is the startups with a strong independent brand and consumer affinity have the highest likelihood of survival.

I'd highly recommend The PayPal Wars to anyone looking to really understand what it's like to work inside a rocket ship startup with an A-team at it's helm.
Related Essays
Want to accelerate your product career?
I've finally distilled my 15+ years of product experience into a new course designed to help PMs master their craft. Join us for the Summer '22 cohort of Mastering Product Management.
Enjoyed this essay?
Get my monthly essays on product management & entrepreneurship delivered to your inbox.