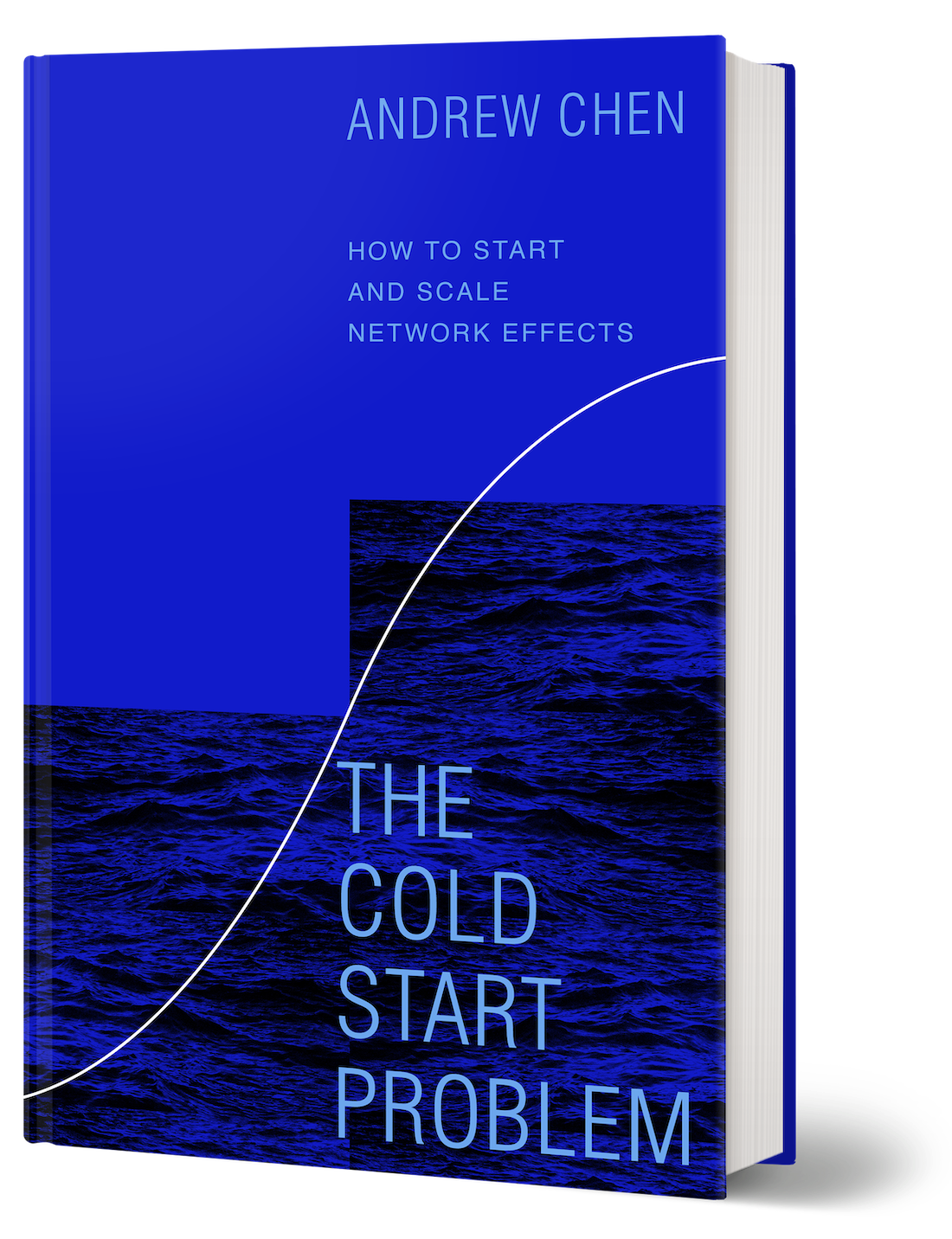 In Silicon Valley, we are all familiar with the concept of network effects, which describes what happens when products get more valuable as more people use them. We experience these effects everyday when we use products like Uber, where the more drivers who join, the shorter your wait times; Slack, where the more team members that join, the quicker it is to communicate with more of your colleagues; and Airbnb, where the more travelers that join, the better the listing reviews. And we have seen these network effects enable companies like Apple, Google, Facebook, and Microsoft grow their flagship products to over a billion users each. We also realize in today's highly competitive markets where defensive moats are weak that network effects are one of the best protective barriers for building an enduring business.

And yet despite understanding the importance of network effects, our collective understanding of the full dynamics of network effects has remained fairly limited. We don't have established best practices for building and scaling networked products nor addressing the inevitable challenges that arise when we attempt to do so. Today Andrew Chen fills this knowledge gap with the launch of his new book, The Cold Start Problem. He's created the definitive guide on network effects targeted at practitioners seeking to build and scale the next generation of networked products.

I believe every product manager and entrepreneur should deeply understand network effects and how to wield them to build and scale successful networks. Given this, I wanted to share my biggest take-aways from reading The Cold Start Problem. 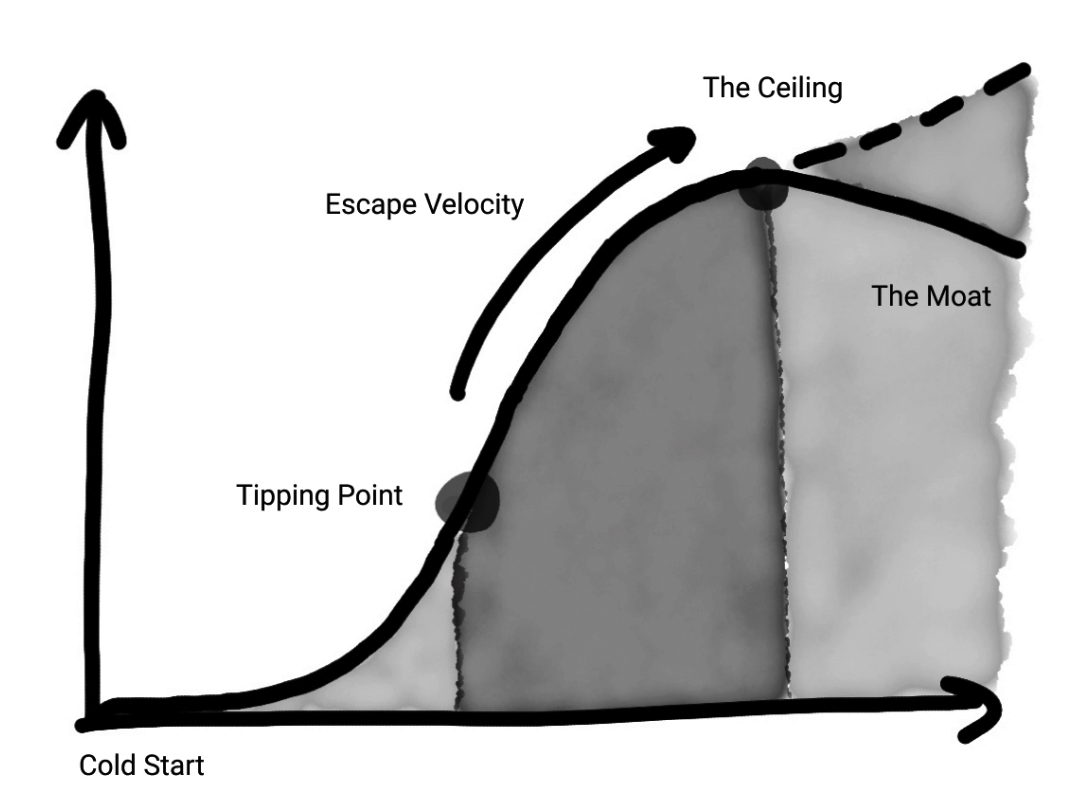 The Cold Start Problem
The first stage of creating a network is by far the hardest. While we often talk about the positives of network effects, at their inception, network effects are actually a destructive force where new users churn because not enough other users are there yet. Andrew calls this anti-network effects, which are the negative force that drives new networks to zero. Slack isn't useful until your colleagues are also on the platform. Uber isn't useful until there are enough drivers, who won't drive until there are enough rides. This situation creates the classic chicken and egg problem to bootstrapping a network, which Andrew calls the Cold Start Problem.

The first step to solving the Cold Start Problem is identifying and building an atomic network, which is a single stable, engaged network that can self-sustain. If you can accomplish this, you can then likely build a second network adjacent to the first. And then rinse and repeat. You see this strategy play out in all the largest networks, whether it's Facebook growing from tight-knit college communities, Uber growing with a city-by-city approach, or Slack growing team-by-team within a larger company. Each product needs to identify what the appropriate atomic network is for them. For Zoom, it's simply two people that want to video call each other. For Slack, they found it took 3 users to have a stable network. But for Airbnb, it took hundreds of active listings in a given market for a stable network to arise.

Andrew goes on to share exactly how to build such an atomic network, including identifying the hard side of the network, solving a hard problem for those users, developing a simple to use killer product to solve that problem, and ultimately delivering a magic moment to them.

Tipping Point
Once you have built your first atomic network, the challenge moves on to creating a repeatable strategy for building many more networks to expand the market. Andrew shares some of the most successful tactics for accomplishing exactly that.

Counterintuitively, one of the most successful ways to grow a network is to make it invite-only. LinkedIn, Gmail, and Facebook all leveraged this tactic successfully to grow their networks. The reason this works is not just because it generates hype and buzz, but it provides a better welcome experience for new users, since they are already connected to their inviter and likely others they may already know. LinkedIn started by inviting the network of Reid Hoffman, it's founder, as well as other early employees and investors. These were people who were well connected within Silicon Valley, immediately creating density of network within the Silicon Valley ecosystem and immediately delivering utility to this specific audience.

Another popular approach to bootstrapping networks is what Chris Dixon famously called come for the tool, stay for the network. The idea is to initially attract users with a single-player tool and then get them to participate in a network over time. Instagram and Dropbox are great examples of this strategy. While Instagram built a popular photo filtering app, its key insight was creating its own social feed and profile mechanisms, plus linking back to Instagram when photos were shared out to Facebook. In this way, they interweaved the tool of photo filtering, with a standalone photo sharing network that grew in popularity over time.

Escape Velocity
Once your product sees success and starts to scale, you enter escape velocity. At this stage your work transitions to focusing on strengthening network effects and sustaining growth.

To do so, it's helpful to break down network effects into the trio of forces that are actually in play so you can focus on optimizing them.

The second is the engagement effect, which increases interaction between users as networks fill in. Twitter, for example, can spur much more engagement now that the network is built out with many types of content creators, whether they are media outlets, celebrities, or politicians. This opens up far more use cases for Twitter, in turn driving more engagement amongst users. You'll need to determine what your product's engagement loops are and how you can make each stage of the loop perform better.

The third is the economic effect, which improves monetization levels and conversion rates as the network grows. Workplace products, for example, can often get companies to convert to higher tiers of pricing as the number of users using them grows within a company.

This trio of effects creates a powerful flywheel that can be optimized to scale your product to potentially billions of users.

Hitting The Ceiling
The reality is that a rapidly growing network wants to both grow as well as tear itself apart. This is when a network hits the ceiling and growth stalls. This can be caused by a variety of factors: market saturation, degradation of marketing channels, churn from early users, bad behavior from trolls, spammers, and fraudsters, lower quality engagement from new users, and more. This is why the trajectories from even the top products typically grows in fits and starts. Andrew goes into each of these causes and shares perspectives on combating them.

But he also makes a key point at this stage: in the end, only new products and innovation will kick off the next big growth curve, which is what ultimately encourages startups to grow from single products into multi-product companies.

The Moat
The final stage focuses on leveraging network effects to fend off competitors, which becomes the focus as the network and product matures. This isn't as straight-forward as it may seem because your competitors can also leverage the same network effects, resulting in fairly sophisticated network-based competition.

The strategies to successfully win given these dynamics depends on your position in the market, as either the David or Goliath. For the upstart to successfully compete, they need to pick off niche segments within a larger network and build atomic networks that are highly defensible with key products features. On the other hand, the incumbent uses its larger size to drive higher monetization and value for its top users while fast-following any niches that seem to be growing quickly. Andrew shares case studies on Uber vs Lyft, eBay China vs Alibaba, and Microsoft's bundling strategy to go deeper on how networks compete.

The Cold Start Problem offers incredibly actionable tactics for building and scaling network effects at every stage of your product's journey. I'd encourage every product manager and entrepreneur building and scaling a networked product to order a copy of The Cold Start Problem today.
Related Essays
Want to accelerate your product career?
I've finally distilled my 15+ years of product experience into a new course designed to help PMs master their craft. Join us for the Spring '23 cohort of Mastering Product Management.
Are you building a new product?
Learn how to leverage the Deliberate Startup methodology, a modern approach to finding product/market fit. Join us for the Spring '23 cohort of Finding Product/Market Fit.
Enjoyed this essay?
Get my monthly essays on product management & entrepreneurship delivered to your inbox.