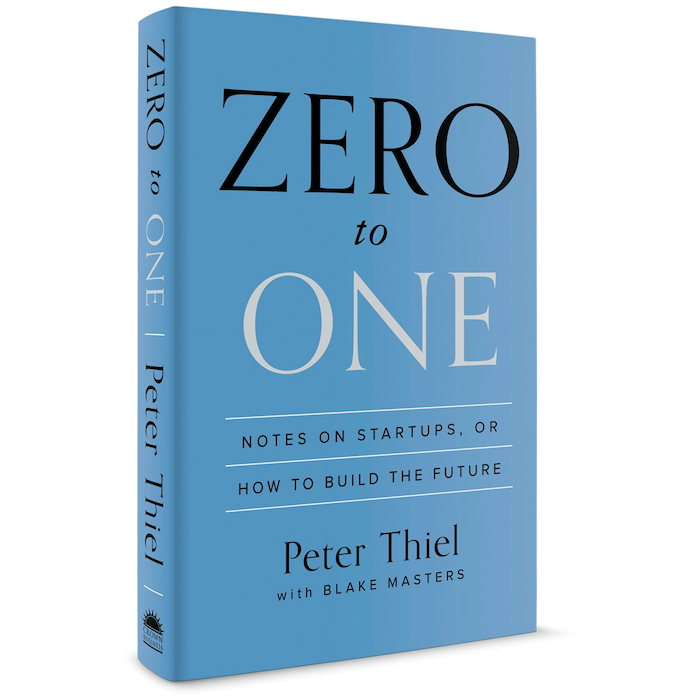 The Lean Startup methodology, first described in 2008 by Eric Ries, has taken the startup world by storm. His 2011 book, The Lean Startup, has become a New York Times best seller, selling millions of copies to aspirational entrepreneurs. The concepts the methodology describes, from hypothesis testing, to MVPs, to pivots, have become common vernacular in startup circles. And every major business school now offers an innovation class that leverages the business model canvas and other lean principles for developing a new product idea.

When an ideology becomes dominant, I find it helpful to read other perspectives on the topic to better inform my own thinking around it. So this past week I decided to re-read Peter Thiel's Zero to One, another New York Times best seller, that he published in 2014 based on lecture notes from a course on startups he taught at Stanford in 2012. Peter Thiel, the consummate contrarian, delivers a compelling anti-lean startup manifesto and offers an alternative playbook for startup founders. I wanted to share that perspective and playbook for startup founders looking to build a more robust toolkit for finding startup success.

Origin of Lean Thinking
Thiel starts by sharing the origin story of lean thinking. He describes it as a direct reaction, and in fact an overreaction, to the excesses of the dot com era and subsequent crash. Obviously there is a lot that startup founders and investors got wrong during that era, suffering from hubris, extravagant spending, unsustainable business models, and inflated valuations. But the market collapse was ultimately interpreted "as a kind of divine judgment against the technological optimism of the 90s". People learned to treat the future "as fundamentally indefinite, and to dismiss as an extremist anyone with plans big enough to be measured in years instead of quarters."

Thiel describes four specific lessons that Silicon Valley learned from the dot com crash that came to dominate business thinking:
But Thiel believes that the opposite principles are probably more correct:

Plans Matter
Thiel takes direct issue with one of the primary tenants of the lean startup methodology: its focus on experimentation over elaborate planning. Thiel believes the experimentation approach can help you to optimize an existing product that is already successful, but won't help you to invent something entirely new. He says "a company is the strangest place of all for an indefinite optimist: why should you expect your own business to succeed without a plan to make it happen? Darwinism may be a fine theory in other contexts, but in startups, intelligent design works best." He goes on to share the example of the iPhone, a fundamentally new smart phone that was built by Apple with well-defined multi-year plans, not through MVPs and rapid experimentation. Thiel then spends the rest of the book sharing exactly what elements a good plan needs to have in order to build an enduring business.

Secrets
"Every great business is built around a secret that’s hidden from the outside. A great company is a conspiracy to change the world; when you share your secret, the recipient becomes a fellow conspirator.”

Thiel starts by asking “What important truth do very few people agree with you on?” This contrarian question helps you identify the unique insight from which you can develop a compelling business. Why are secrets important? To ensure you start by avoiding competition. Competitive markets destroy profits, since everyone is in a fight to survive. So it's best to start with an idea that avoids competition entirely.

Sequencing Markets
“Sequencing markets correctly is underrated, and it takes discipline to expand gradually. The most successful companies make the core progression - to first dominate a specific niche and then scale to adjacent markets - a part of their founding narrative.”

Thiel makes the case that the perfect target market for a start-up is "a small group of particular people concentrated in a group but served by few or no competitors." It's absolutely critical to identify that initial small market, focus entirely on dominating it, and then expand to adjacent markets only after that. Founders tend to instinctively focus on large markets, convincing themselves they only need to attract a small percentage of the market to have an interesting business. But what they miss is that it's extremely difficult to even get a small share of a large market. Instead its far simpler to dominate a small market and then grow from there.

He shares numerous examples of this, including Tesla, which started with an expensive sports car before building luxury sedans & SUVs and only years later going after mainstream sedans & SUVs. He also shares the example of Facebook, which started as being only available to Harvard students, then other Ivy League universities, then all universities, then high school students, and only years later made available to everyone 13+.

Thiel cautions though that while the market should be small, it shouldn't be non-existent. He made the mistake with PayPal of initially focusing his payment service on users of Palm Pilots. But there were too few of them and that market never grew. Only after pivoting to eBay PowerSellers did they land upon an interesting small market to dominate.

Distribution
Founders generally underestimate the importance of distribution - a catchall term for everything it takes to sell a product. "The Field of Dreams conceit is especially popular in Silicon Valley, where engineers are biased toward building cool stuff rather than selling it." It's far better to think of distribution "as something essential to the design of your product. If you've invented something new but you haven't invented an effective way to sell it, you have a bad business - no matter how good the product is."

Protect Your Monopoly
"For a company to be valuable it must grow and endure, but many entrepreneurs focus only on short-term growth. They have an excuse: growth is easy to measure, but durability isn't. Those who succumb to measurement mania obsess about weekly active user statistics, monthly revenue targets, and quarterly earnings reports. However, you can hit those numbers and still overlook deeper, harder-to-measure problems that threaten the durability of your business."

Thiel suggests that in order to build a durable monopoly, your business needs to exhibit some combination of the following characteristics:
It's important to analyze your own business according to these potential characteristics to determine how to make it durable.
Related Essays
Want to accelerate your product career?
I've finally distilled my 15+ years of product experience into a new course designed to help PMs master their craft. Join us for the Summer '22 cohort of Mastering Product Management.
Enjoyed this essay?
Get my monthly essays on product management & entrepreneurship delivered to your inbox.